Come and look here, everyone! – I found it!

Few things come close to peeling back layer upon layer of sand that eventually, and if lucky, unveils an ancient artifact encircled in centuries of mystery. The excitement of making such an archaeological discovery cannot be described; it’s the thrill of a lifetime!

Many an amateur archaeologist started as a treasure hunter, honing and crafting their skill in artifact recovery over many years. Most times, only a trained eye will spot artifacts or any skeletal remains embedded in rock formations, sand or dirt. Another lesser-known fact is that some of the most significant discoveries were purely by chance.

The process typically starts by discovering ‘something’ that doesn’t quite ‘belong’ where it was found. You may stumble upon some pottery while working a field or garden, or, some coins if the goddess of luck feels favorable. 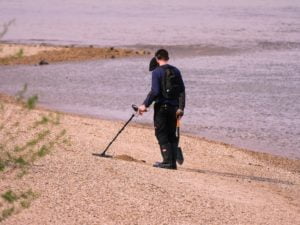 This is precisely what happened during December 2014 on a cold winters day in the English countryside to Peter Welch. He and some of his fellow metal detector enthusiasts made a remarkable discovery. While scouring a hill, they picked up a signal with their metal detectors and started digging. To their surprise, they found Saxon coins. The find was so much of a surprise that they didn’t immediately grasp the historic and monetary value of it. Later, and upon proper excavation, some 5,000 additional antique coins were discovered, valued at approximately $1.5 million US dollars.

In September 2014, The Independent reported that a Devon enthusiast, Laurence Egerton, discovered two ancient coins in a field. Upon reporting his find to the authorities, proper excavation was conducted, and to everyone’s surprise, some 22,000 coins were unearthed. The coins were identified as Roman in origin and around 1,700 years old. Egerton’s discovery was the fifth largest find in the UK at the time.

POT OF GOLD OR ANCIENT HISTORY?

At this stage, you may think that what Welch and Egerton discovered was the pot of gold at the end of the rainbow. Rarely true. Archaeology is not everybody’s cup of tea. It’s a fine art that takes years of study and lots of hard work. You will have to know where and what to look for.

Official archaeological expeditions require a lot of resources, and months of preparation, planning, and funding. Unseasoned ‘treasure hunters,’ including most metal detector enthusiasts, will most probably find the painstaking excavation process dull. Imagine stone age artifacts that look like ‘normal rocks’ to novices, being the talk at lunchtimes among archaeologist. Few who have not studied archaeology will understand what the excitement is about.

Not everyone is interested enough to attend seminars and lectures or to work for long hours in harsh conditions in strange lands. It’s a hand-on back-breaking job where you have to be without family and friends for long periods. You may also find that archaeologists are an elite and to some extent, a very eccentric group of people that thinks and does things quite differently.

If you are an amateur and metal detector enthusiast or wish to become one, beware.  Hunting for that glamorous pot of gold at the end of the rainbow is not all its made out to be. Even though you might strike it lucky and find what you are looking for, you might not be able to claim or keep it. Rarely in fact. In most countries around the world, archaeological artifacts and treasure belong to the state. From there it will most probably end up in a museum where it rightfully belongs.

Furthermore, most archaeological findings are not compensated. Since . . . Yes, you guessed it-it belongs to the state, and no dues are owed to the finder in most countries. (Unless the find is of extreme importance, rarity or never found before.)

TREASURE AND THE LAW

In the UK, the Treasure Act of 1996, claims all gold and silver older than 300 years for the crown. It’s an offense not to report a find to the authorities within 14 days. And yes, it has to be reported to the nearest coroner who will arrange for an inquest. In the US and other countries, different laws with more or less similar outcomes exist. The law in some states also states that any stone and related artifacts found will be considered ‘property of the state.’

That’s the ‘bad’ news. The good news is that you may qualify for a finder’s fee if you had permission to be where you found the treasure. The other plus point is that you will make the news and receive credit for the find.

To get back to treasures found. At a site near Diss in England, an excavation led by the American Veterans Archaeology Recovery Program uncovered a pair of World War II dog tags and coins. The site is also home to the 100th Bomb Group Memorial Museum. While of no significant monetary value, the dog tags had historical value, and the idea was to return it to the families who lost a loved one.

Derek McLennan, with a metal detector in hand, uncovered a significant amount of gold and silver Viking artifacts dating back as far as the 9th century. All in all, about a hundred items were excavated. The artefacts included items such as a solid silver cross, silver pottery, a golden bird pin, as well as a rare silver cup with animal engravings. The discovery was dated back to the Roman Empire. Derek was a lucky man, the year before he also uncovered some 300 coins of great historical significance.

Historical artifacts are a big part of many nations’ cultural heritage and religions. Artifact hunting and the subsequent collecting of these items are also a significant part of amateur archaeology. But, the trade has a dark side. Ruthless artifact hunters will recklessly hunt for historical artifacts and sell it on the black market to the highest bidder. They have scant concern for the damage to other authentic pieces or the exaction site.

Once an artifact has been unlawfully or blindly removed from its resting place, it has little value left for archaeologist or historians, since an artifact has to be uncovered intact and studied scientifically. If not, there is no telling how old the artifact is or if it is even a real one or fake. Therefore, never remove what you think might be an artifact. Contact your nearest museum or university’s history department and invite them to undertake an investigation.

One of the most remarkable discoveries in 2017 was that of a supposedly Dead Sea Scroll parchment in a cave in Israel. A blank parchment and some empty scroll jars suggested the existence of more scrolls. Pickaxes found in the cave indicated that it was probably already looted as far back as the 50s.

To most people, the world’s most significant and jaw-dropping historical artifact discoveries are those made in Egypt. As recent as 2018, a large tomb was found in Luxor. Inside was the sarcophagus of a woman identified as Pouyou who lived during the 18th dynasty (1549/1550 to 1292 BC). The discovery was confirmed by the Egyptian Ministry of Antiquities, who also confirmed the find of hieroglyphics referring to the goddess Mut. It just proofs the point that there are still some remarkable discoveries to be made, even in present times.

With the advancement of technology, we can assume that amateur archaeologist and treasure hunters will play a significant part in forthcoming historical finds.