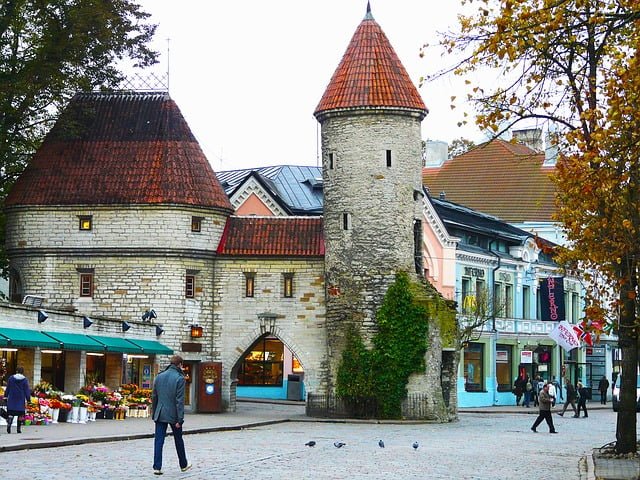 Estonia’s largest city and capital Tallinn, is a beautiful city situated to the north coast of Finland, 80 km (50 miles) south of Helsinki and east of Stockholm.  In modern times, Tallinn is regarded as the seventh smartest city and among the top 10 digital cities in the world. I had the honor of visiting Tallinn several times in 2015, astonished by the country’s rich history and forward looking, digital future.

After arriving in the modern port of Tallinn via the cruise ship that I worked on, we are quickly transported to Old Town by bus. Old Town being one of three historical parts that medieval Tallinn consisted off.

I’ve never been in Europe, therefore had I no idea what to expect. I was thus pleasantly surprised when I first set foot onto the old cobblestone streets of Tallinn and felt a shiver of nostalgia pass over me. I almost felt like the Heroin, Claire Beauchamp of the Outlander Series being transported from modern day Scotland to medieval Scotland.  “I must have visited this place in a previous life,” I thought.

Old Town is one of those historical areas that have been well preserved and gives one an authentic taste of what it was like back in the 12th to 18th century.  I spent the day walking for four and a half hours through the old cobblestone roads – admiring gothic spires, iron street lamps, gothic architecture and 12th to 18th century Christian art.  As usual, I had no specific route or plan in mind, just going where instinct lead me.

First, I end up at Town Hall – the best-preserved Gothic Town Hall in Northern Europa, built in 1402-1404, and the headquarters of the burgemeisters (mayors) of old.  An old pharmacy looms alongside it – regarded as the oldest and most continues operating pharmacy in Europe since it occupation in 1422.

Town Hall Square, filled with tourists, artists and performers dressed in medieval attire, stimulates the creative parts of my brain. The experience is so rich and overwhelming that I’m instantly transported back in time.  I taste the freshly baked bread from the old-bakery shop just across me where-after I spend several minutes admiring the merchant’s goods along the square as they wave and try to lure me closer. They are dressed in brown, weathered tunics, while woman float about in puffy dresses shopping for the newest broach or bracelets.

From Town Hall I was about to take a left to what was indicated to be Toompea, when I noticed a purple, green building about 500 meters further along the winding road.  Ever in wonderment of architectural design, I wander towards it in search of its history.  I soon discover it to be St. Nicolas’ Church, founded by German settlers around 1230.  It is now also known as the Niguliste Museum, dedicated to housing famous pieces of Medieval art and altarpieces.

The church has amazing acoustics, making it a favorite concerto venue.  The artistic wonders on display in the museum was some of the most beautiful I had ever seen.  You can find some of the oldest oil paintings here, dating as far back as the 12th century.

Upon my entry into the main hall am I greeted by beautiful, classical music.  I soon discovered four artists staged in front of an old altarpiece, performing pieces from Mozart, Bach, Vivaldi and Bock.  I walk in the corridors in amazement of gold chandeliers, the high vaulted ceiling and the various 14th century crests. I take a seat close to the artists ten minutes later, who plays so beautifully that my mind almost magically enters into a deep state of much needed self-meditation.

I was lost in paradise, having one of my most momentous moments of inspiration and wisdom.  At this moment I became aware of many things: The beauty of the music reverberating and talking to every cell in my body, healing and soothing; how the couples’ demeanor in front of me changed from annoyance to love within 5 minutes. The older gentleman suddenly taking her hand where just 5 minutes ago he didn’t want to know anything off it when she wanted to take his.

I become aware of how my inner being suddenly appreciated these valuable moments of serenity and peace from the daily extravagant situations it had to battle through as Spa Director onboard.

I’m not particularly religious – not hanging onto any earthly-human made faith – although, I do find the quiet, peacefulness in places of worship wonderful.  It happens at most religious centers around the world. From mosques, churches, cathedrals, Buddhist- and Hindu temples, to name but a few.

I then realized that its the essence of what these buildings were created for in the very beginning when the creators were divinely inspired to create something of beauty, peace and purity for their God.  The pure thoughts that went into creating places of worship is what makes these places so tranquil, peaceful and true escape routes for busy modern minds, bodies and souls.

From St. Nicolas Church I take a route between several buildings and discover a famous artist called Michel Sittows,’ house. It starts raining at this point, and with only a hoody available to keep warm, I walk quickly past it and along the cobblestone street until I notice a small, red board that reads ‘Toompea.’  Most people walk past it. ‘Strange,’ I think to myself. ‘Why is no one entering through here. It looks very old and worthwhile of discovery by an avid seeker of truth and history.’

I soon discover it to be a somewhat dark alleyway. Ever curious, I decide to take the road others pass by, and get a wondrous reward as I exit and walk straight into an old wall with three terraces. Upon climbing the stairs, I notice it is known as The Danish Kings Garden, created by Kind Valdemar the II of Denmark, around 1219.

I take a walk up the terrace steps and discover Maidens’ Tower, erected in 1370.  After its defense function became absolute, it was used as a home.

Upon walking around the area for several minutes – not knowing where exactly I was headed – the city wall that separates Old Town and Toompea suddenly towers in front of me. “Wow! Simply beautiful.” As a 15th century merchant on route to sell my goods to a noble family, I would have had to pass through one of several gates that separated the plebs from the nobles. Centries and guards would have been posted along the walls. Flags with family crests would have wallowed in the wind. While woman, children, beggers, goats, merchants and several others seeking council from the King or Queen would have waited hours here to gain entry.

I take a few careful steps towards the gate on the muddy road, up towards and through the gate that separated plebs of old from the nobles, an area known as Toompea. 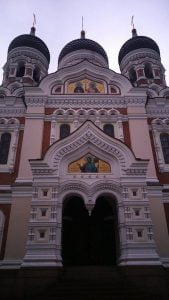 Rain starts pouring more heavily and I can feel my hoody getting soaked. Not wanting to stop my explorations at this time though, I push on and is soon rewarded as I am brought to a standstill in front of a Russian looking Orthodox church. It looks a bit out of place here with everything so old.  The architecture is masterful though, with onion domes and gold inlays. Gorgeous! 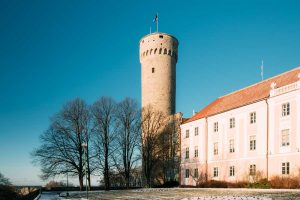 Right to the left of the St. Alexander Nevsky Cathedral, is the Seat of Parliament, housed in what was the Toompea Castle and Pikk Hermann Tower of old.  The German Knights of the Sword built the first fortress in 1227. 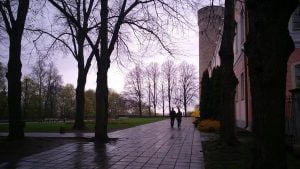 I walk to the right of it, and find a beautiful garden called the Kuberneru Aed (Governors Garden) and the Pikk Herman Tower. Today a symbol of Estonian nationhood.

From here my journey takes me through three evergreen parks, which is like oil to dry skin for the soul.  I love the feeling of space, natural surroundings and the green parks Tallinn boasts, and found the city to be one of the cleanest and most plant friendly I have seen thus far.

After four-and-a-half hours of walking in Old Town and Toompea, I finally take a look at my watch and realize that I will have to hurry back to port before my ship leaves me behind.  Not wanting to ‘miss the boat,’ I start the journey home, but get absolutely lost.  Shivering and cold, not wanting to pay for a taxi, I walk along the old cobblestone streets, hoping to find something that looks like a ship.  I am in luck; 20 minutes later I exit into the mule of modern day traffic, which leads to port.

Awh! Such a bummer to come back to the 21st century!

It was one amazing day spent in the history of a city I didn’t know even existed.  Some of the treasures of the day was the re-affirmation that our history is one of the things we as humans will always strive to discover; for without a past there is no future.

Historically Tallinn was divided into three parts:  Toompea, Old Town and Estonia.  These are all major attractions with a variety of 12th-17th century buildings, art and medieval architecture. 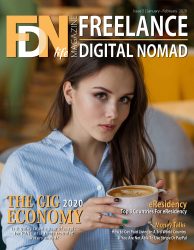 Marie-Berdine Steyn is an FDN from South Africa, who owns, founded and manages FDN Life and MBS (Create-Innovate-Inspire). She specialise in business management, entrepreneurship, writing, editing, graphic design, website design, SEO, social media marketing, and many other skills acquired over 12-years in freelancing.
All Posts